Sunday: 2 hour ride (41 miles). This was a rough ride for me. I made the mistake of not taking my daily allergy pill (I’ve been experimenting not taking it and it’s actually been ok more often than not) OR the Singular the night before, and suffered through the first 2/3 of the ride. Luckily, I wasn’t a TOTAL dummy, and brought a Zyrtec with me. I took it when we stopped and was ok for the rest. Lesson learned.

Monday: swim 64 minutes (2300 meters). I was feeling overwhelmed by the idea of swimming for over an hour, I’m not going to lie. As it turns out, I forgot to keep track of my swim vs. rest time and just stopped when I thought I was done. I stopped my watch at 63 minutes and 40 some seconds – couldn’t do that again if I tried. I did some more drills this time around, too, and started focusing on trying to breathe bilaterally (I only breathe on the right currently – my left side is much weaker).

Tuesday: Group ride/run. Ride 75 minutes (24.5 miles) and run 15 minutes (1.75 miles). We took a different route this week and the change of scenery was nice, but man no matter how much I say I’m going to “take it easy”, my competitive nature kicks in and I want to try to keep up with the fast group. The problem is, I’m not quite fast enough. I did, however, manage to get up to 28mph once! I slowed down because I was afraid I was going to fall off!

Wednesday: speedwork day! Run 43 minutes (4.5 miles). It was FINALLY not feeling like the 7th level of hell outside, so I took the twins with me.

The workout was 8×400 at slightly faster than 5k pace, with 200 recovery. My recoveries, admittedly, were mostly walking. I’d blame the cracker requesting but really I was also tired. Still, I managed to stay within my goal (slightly faster than stroller 5k pace) for at least the 400’s. Since we’d had such a good workout, I drug them out for recovery drinks. 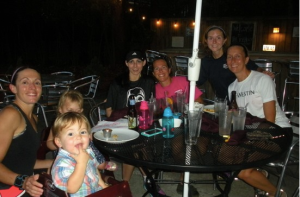 Saturday: Run 43 minutes (5 miles). Originally I had planned to do a short swim/run brick, but either I’m FINALLY starting to get used to the humidity or the temp has been dropping a bit, because runs have started to feel not as soupy. So, I decided I’d really like to get in a good run. A friend was doing an 18 miler so I joined him for 5 of it, with an average pace of 8:41.

Unfortunately, I’ve discovered that my legs are a bit more tired for a run of that distance and pace thanI feel like they should be. I’ve REALLY dropped the running mileage and picked up the swimming over the summer. The problem is I want to follow the “Run Less, Run Faster” plan for the marathon in January (running 3x a week is really optimal for me both mentally and physically) and it recommends starting with a 25 mile per week base. This week, I ran 12 miles. So, I’m going to be tweaking my my times to have a bit less swimming and a bit more running so that I can be up to at least 20 miles a week by the end of September. Honestly, that 30-45 minutes per week isn’t going to make me a phenomenal swimmer in 6 weeks and I know I can do the distance (just not fast), and I’m mentally ready to put in some more time running.

I was a little short this week, but I purposely took it a little easier because the final sprint race of the season for me is tomorrow. 🙂

Next week is another heavy week. It may actually be the peak week at a little over 8 hours total)