Week 15 – The Case of the Missing Spatula

This week was THE week. The run I’ve been dreading since day 1. The longest run on schedule. The one I complained about last week. And, thankfully, the last one. Until race day of course.

Seriously, I’ve been semi dreading this run for weeks. I knew we were going to be in colder weather and I honestly figured I’d be on my own, so I was picturing myself running 20 miles on sidewalks bundled up like the kid in A Christmas Story while hurdling over snow drifts.

Perhaps my imagination has a mind of its own….just a little.

Luckily, my long time friend and fellow crazy runner (actually, she’s worse) volunteered to run part of the run with me if I met her at the path halfway between our two houses. As it turns out, we also met for dinner the night before at a restaurant within walking distance of the pathway. We arrive at dinner and I get out of the car.

We talked a bit about the run the night before. Was I nervous? Did I bring food to eat along the way? Did I bring warm clothes? My parents so nicely drove by the entrance before we went home so I’d know where I was going. It looked a bit daunting in the dark. I distinctly remember saying ” I’ll bet we’ll be the only cars here at 7:30am”.

Morning didn’t greet me very warmly. My bed did. But I got up anyway, got dressed, ate a bit and was out the door.

My car greeted me with a smile. (Good morning! Don’t you wish you were still in bed?) 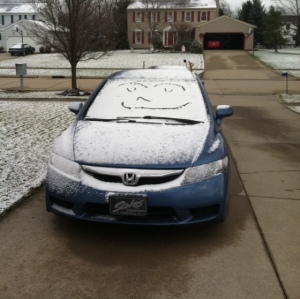 Unfortunately, when I tried to start it, it wouldn’t turn over. Fabulous. After having the semi flu on Thursday and now my car not starting I was beginning to think I wasn’t meant to run this thing. Luckily, though, the car turned over. But, I forgot about the ice and snow. My windshield was iced over. And having lived in SC for the last 5 years, I no longer own an ice scraper. So I went back into the kitchen and grabbed a spatula. There were three of them there so I figured it wouldn’t be missed for a few hours. (it worked pretty well actually….perhaps there is a market for spatula scrapers?)

Finally I was off. Then my low tire pressure light came on. For the love of Pete. Oh well, I’m still off.

I arrived and pulled into the parking lot. And was greeted by half a dozen other cars.

Well I’ll be damned. We ARE all insane.

My goal was to try to keep a 10 minute mile pace on average. I’d tried a 9:15 or so at 17 miles and about died at the end. My 19 miler was a struggle, though I tend to run slower alone, so I figured this one could take me almost 3 and a half hours. I also have a tendency to start out too fast and hurt through the end, so I made sure to say I wanted to try to stay around a 10 minute mile in order to avoid 4 miles of “ow”.

Ironically, for all the dreading, worrying and complaining, this run turned out to be the best of them all. The trail was really nice, the weather was perfect, and overall I felt really good. I dunno if it was the ibproufen I took before I left, the weather, the company or the eating a bigger amount every hour instead of a little at a time that did it (or maybe all of the above). Jenny (bless her) actually stuck around for all 20. (who runs 20 miles for fun? oh wait…) Around mile 14, where I usually hit a wall and start to get sore, I was actually gradually going FASTER. Surprised, but feeling ok, I just went with it, and actually finished the last mile at 8:38 . Overall, I actually finished the 20 mile run faster than the 19. (9:28 min/mile or 3 hours 9 minutes!)

Thanks Jenny. Seriously. She’s about the only girl I know that would run 20 miles with me just because.

We look pretty good for having just run 20 miles. 🙂 Oddly, I feel pretty good, too. And the best part about it? Its all downhill from here.

I got home, showered, and my dad was making breakfast. He starts getting the eggs together.

Dad: Where the HECK is my spatula?!?

Me: Uh….that was me. I used it to scrape the ice off my car.

I guess I grabbed the wrong spatula.

Apparently, while he was making eggs earlier, he was looking for this particular spatula. He had my sister searching drawers, and finally my mom, exasperated, states “maybe Bryan stole it”

Moral of the morning? Sometimes when the conditions are right, the hardest trials can feel like the easiest.