I Want To Be an Ironman – Race Weekend Part 1

Dang. 6 and a half months of training, tracking, falling asleep at 8:30 and eating all the food on the planet, and race weekend is here.

Admittedly, even 48 hours after the news that the bike was shortened pretty drastically (from 112 miles to 50 miles due to residual flooding issues), I was still bummed. A few people in the IMNC Beach to Battleship Facebook group had talked about the possibility of additional post race road or trainer miles , and I was glad there was still an option, even though it wasn’t the same. I woke up and posted an update on Facebook about my plan to swim, bike, run and bike again, saying that it would make a good story to others and for the twins later on about handling change and thinking outside the box. I did this partly to get myself motivated by this idea, and packed my trainer among my things. I managed to shove all my stuff into two bags and felt pretty accomplished about that.

Tami picked me up around 8am and we began the drive towards Wilmington, where I talked a bit more about my disappointment in the race changes (even though I understood why they happened). Luckily, Tami was very understanding about the whole thing and assured me that if the full distance was what I wanted, she would do whatever she could to help make sure that happened, because Tami is awesome. A few days prior, she had taken a super obnoxious picture of me with my swim cap and googles on, sticking my tongue out and blown it up to make a giant head on a stick, posting pictures about its preparations.

At one point I started to ask why she couldn’t use a normal picture, until I realized it was normal.

We arrived around noon after a lunch stop and “checked in” to our “hotel”. We actually stayed at an old giant victorian house called the McEachern House . Click the link to see some pictures – it was amazing. We headed to the grocery store and then met her other New York friends staying with us (Kelly, Linda and Tina – Tracy and Rie from Summerville joined us later) before we headed to the Athlete Village to check in and attend the athlete meeting about bus times, transition and race day information. 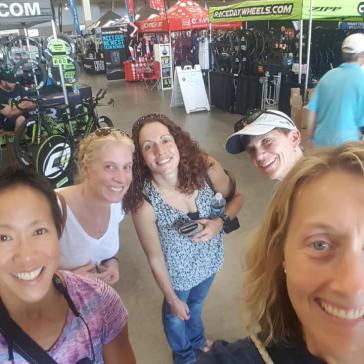 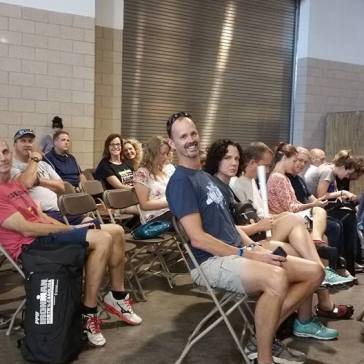 It was here that we learned that the bike course had been extended to 56 miles – allowing the half distance racers the full race and the full distance racers an extra 6 miles. Hey, I’ll take it. It was also here that I learned that the CEO of Base Salts, Matt Miller, had set up an after race trainer ride complete with music and hydration in the parking lot of a TV station that overlooked the finish line, so there was a way to finish the last 56 miles for those who wanted to. I had still been hoping for some road miles, but this was definitely better than nothing.

After the meeting the rest of the group met up and headed down to the dock for ….well, I forgot what it was called, but there was free food, and I was hungry. 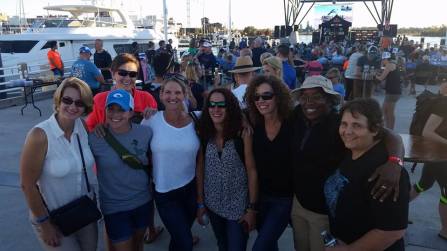 The evening ended with a walk back to the house (only a half mile from the packet pick up) and spent it with the ladies on the giant porch, including a yummy dinner (yes I had just eaten 2 hours before) – a nice relaxing night I needed a great deal after the last 6.5 months.

Friday morning, luckily, was pretty low key. I walked back to the convention center late morning to check out the Ironman store and bought a jacket, hoping I wasn’t cursing myself doing so before the race was over, but because the distance was shortened the full race stuff was 25% off and I got a good deal. Not wanting to spend too much time on my feet I walked back (ha) and started to get my race day bags together. 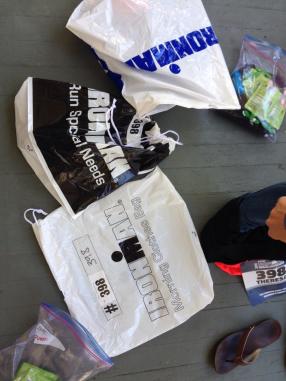 Morning clothes bag: where you put any clothes you want to keep that you are wearing race morning to stay warm. These are returned at the swim start.

T2 bag: run supplies. Mine included shoes, extra socks, another change of clothes (I’m not winning so I wanted to be comfortable), body glide, chapstick, race number and belt, nutrition, a couple ibproufen, tums, pepto chewables (just in case) and another inhaler.

Bike Special Needs: we did not get this bag since the bike was cut short, but in case I decided on the trainer ride I stopped for extra hydration and snacks and made my own special needs bag.

Run Special Needs:  This was a small bag for me. You don’t get these items back, so I included a couple ibuprofen, pepto, tums, extra socks (in case of blisters) and a small bag of potato chips.

We also get a bib and race number stickers to put on your bike and helmet.

Putting it all together is quite the feat. 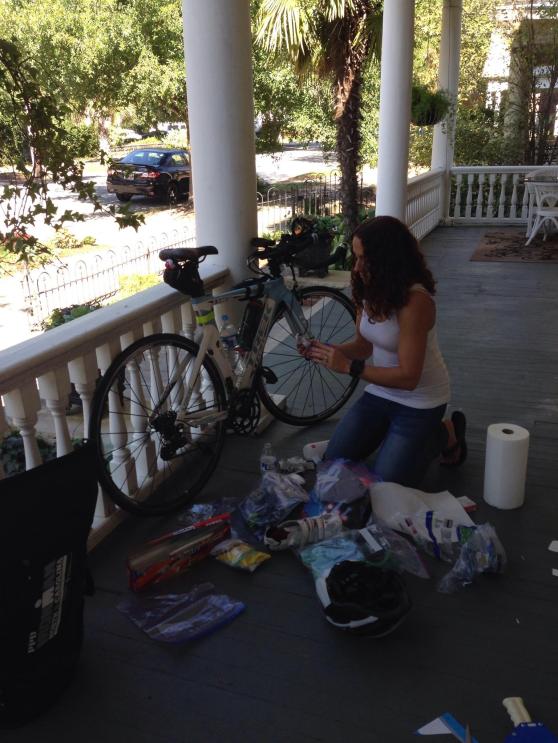 I was extra thankful to have Tami around, who has done FIVE of these, to throw in tidbits like put all your stuff in ziplock bags in case it rains, cut the corners of the bags so the water can drain, trim the bike numbers so they don’t chafe your legs, write your number on the bags in sharpie and tape over it in case the stickers get lost, oh and maybe clean your bike off. 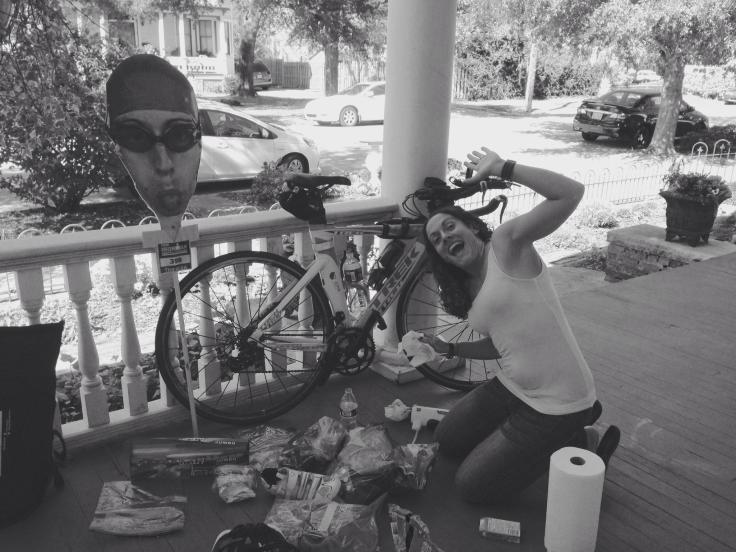 And I dressed fashionably to pin on my running bib number.

This is also about the point where I began obsessively checking the weather. Anyone living in the south knows this summer seems to be never ending, and the weather at this point had still been unseasonably warm. Luckily, a cold front was due to come in that night. What I didn’t realize was that cold fronts often bring wind with them. At the time (ha, million times) I checked the winds were predicted to be anywhere from 13-16 mph and while I knew wind on the bike would suck I began to seriously worry about choppy water on the swim.

I shouldn’t have checked.

Around 1:00, I walked back down to the convention center to drop off my running gear bag, and take a group picture. While we waited I checked the weather. No, it didn’t change. 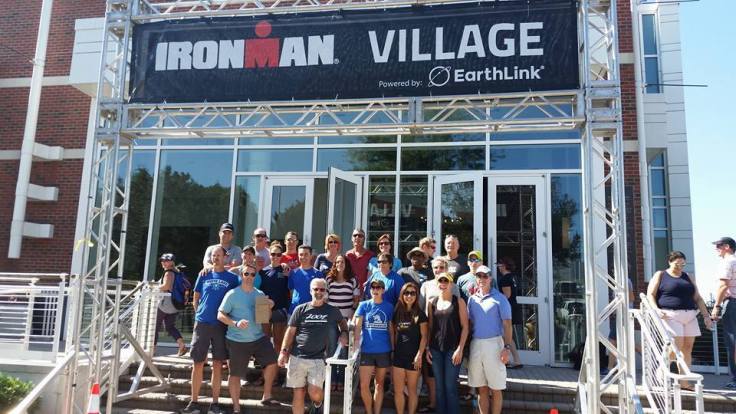 IMNC is apparently uncommon in its practice to have two separate transition areas. I’m told most Ironman branded races (or maybe most all) have run and bike transitions in the same area. In this case, the run transition was near the convention center and the bike transition was about 20 minutes away near the beach. After walking back to the house and eating lunch, the group packed our bikes and drove to the bike transition area. Tami and I both agreed on the ride over that the logistics of this race (and I have nothing to compare it to) were stressful, but it is what it is. The irony here is that every recommendation I’ve read says to try to stay off your feet as much as possible the day before, but between everything I ended up walking over 5 miles anyway. I checked the weather again. Still windy. 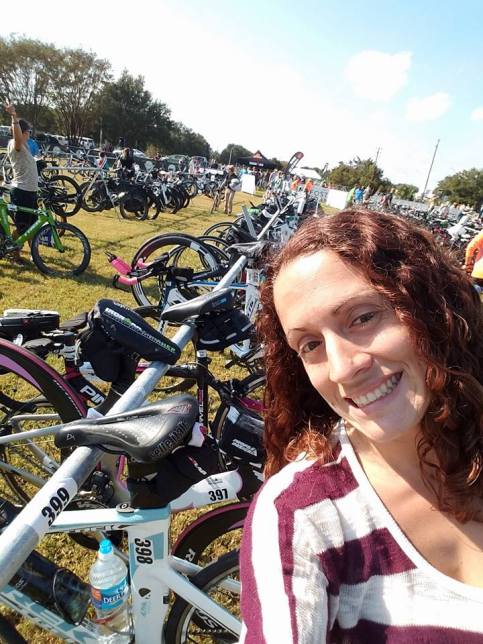 Finally the bike is racked and ready and all bags were dropped off except for what I needed to take with me in the morning. At this point its about 4pm and I’m mentally exhausted, so when we stop at a grocery store I stay in the car and talk to Bryan about his and my parents travel plans (and check the weather – still windy) and we head back to the house to eat, have a drink and rest. The drink was much needed after all the stress of the logistics and worrying about the swim, and between that and some helpful advice on how to handle waves should there be any, I felt better. I still checked the weather though (windy).

Guess what else the weather predicted? A 20% chance of rain. Twenty percent. And guess what it did around 6:00 for about 90 minutes? Rained. On. All. Our. Stuff.

My dad was nice enough to pick up Tami’s bullhorn that she had left at home (and had come in oh so handy during the Palmetto 200) and they stopped over to drop it off around 8:00, so of course I had to use it.

Around 8:30 we all headed upstairs to finalize things and hang out a bit before attempting to sleep. This meant taking ridiculous pictures. 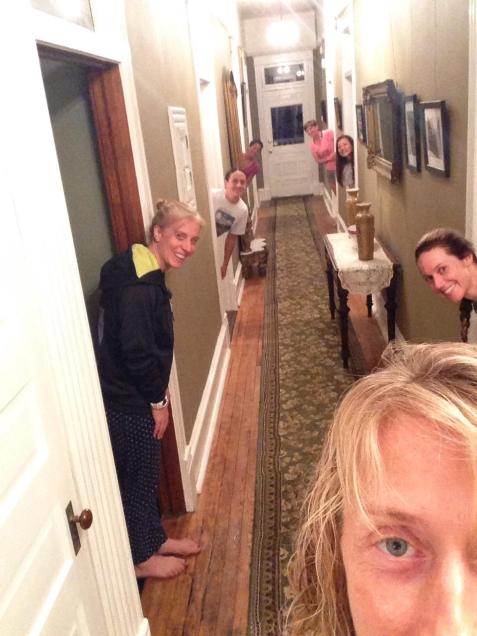 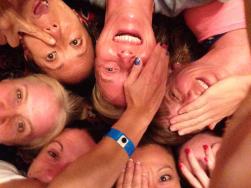 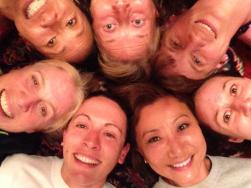 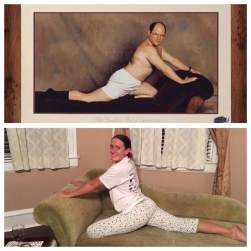 We all went to bed around 9:30. I  called Bryan and then attempted to sleep – after I checked the weather (guess what? still windy) and set and re set my alarm a half dozen times. Because I might have set it wrong the first 5 times.  I never sleep well the night before races and this was no exception, in fact, this was probably the worst night of sleep prior to a race I’ve ever gotten. It’s also the longest distance, by far, that I’ve ever attempted and the longest I’ve spent training for a race, so I guess it was to be expected.

Nighty night (and to be continued).