Last’s weeks partly conscious/partly forced decision to take an easier week turned out to be an intelligent one. It helped me physically recover and mentally take a “break”. I’m told its mostly a mental game at this point.

Monday run/swim. 60 minute swim/2500 yards. Another day it looks like possible rain in the afternoon, another day I swim at home and of course it doesn’t rain. And that easy feeling swim I had last week? I lost it. It feels mostly awkward and slow again. I have a theory, but I’m waiting to test it out before I come out with it. On the plus side, I did a 2500 yard straight swim and felt fine afterwards, except bored. 58 minute ride/16.5 miles/17.1 MPH/82 degrees. Warm. Easy. Not much to say here.

Tuesday run/swim. Monday night I went to bed early – even a bit earlier than usual, around 9:15. I slept OVER 9.5 hours. NINE AND A HALF HOURS. But, I woke up feeling like a new person, and even though the run was still warm, for the first time in awhile I felt like I could run a bit faster. 60 minute run/6.26 miles/9:35 average/73 degrees. The swim ended up an unplanned last minute change, as the weather was calling for rain for the next several days straight, so Bryan picked the kids up and I jumped in the pool. It still felt odd and slow. I’ve tried to make my sets longer and my goal was to do two sets of 1300, but I Was so frustrated with how slow the first 1300 was I broke the rest into smaller chunks. 60 minute swim/2500 yards. 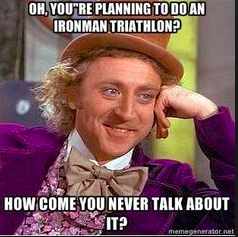 Thursday swim. Again I had planned to do a warm up, a set of drills, and then 1600 straight, but I got stopped 900 in by a landscaper who wanted to use the pool bathroom. 60 minute swim/2500 yards

Friday long run. I had the bright idea to move my long run to Friday so I could have Sunday off, knowing that week my long ride and run during week 26 would be during the week because of work training over the weekend. So I figured I’d avoid what would end up being 17-18 hours of training without a rest day by moving it. What I forgot to consider was the time I put in the week BEFORE. I had already mentally moved it so I just did it, but did a run/walk to play it safe. My pace actually ended up being the same as the week previously – this week felt a bit cooler but last week I was more well rested so it seemed comparable. 2.5 hour run/14.5 miles/10:20 average/70 degrees

Saturday long ride. This was THE long ride – the BIG one. I held back at the beginning knowing how many hours I had already put in the previous 7 days without a rest day, and actually found I had a good amount of energy at the end – enough even to pull the group in the last few miles. 5.5 hour ride/101.5 miles (!)/18.3MPH/72 degrees.

Training Thoughts: I should have kept better track of this day by day and week by week, as I am finding I often forget by the time I sit down to type this. Honestly I had hoped to write a few posts on my thought process as this has gone down, but I have either just been too tired or too busy. I’ve had so many running thoughts about all of this and the effect its had on me and my kids and everyone around me. I felt better this week overall and I think the challenge of the number of hours and the 100 mile ride fueled me, but by Sunday I was pooped again. I’m definitely having to dig deep to find motivation some days.  It really has been a roller coaster ride even hour by hour some days. I haven’t lost it on anyone and I haven’t yet turned into a total dick, but I’m definitely less patient and more irritable.