I wonder how many more little catchy sayings I can use with the word “Tri”.

It’s a little further into the season than I’d hoped before my first Triathlon this year, but my plans to do the previous one were changed when I decided to go ahead and do the LASIK surgery (a decision I do NOT regret one bit!).

A couple of big things changed this year: I purchased a triathlon bike and started riding with a group. I also find a super nice friend to actually teach me how to swim freestyle. See, when I said I didn’t know how to swim, I really meant it. Actually, for awhile I thought “freestyle” meant pick whatever stroke you want. I didn’t know it was the name of an actual stroke type.

Now that I’ve embarrassed myself.

There is something about an open water swim that makes me nervous. I’d done a practice open water swim (I was nervous for that too) and completed up to 1400 meters (almost a mile) without stopping in the pool. I was still nervous. The buoy’s look REALLY far away. The swim warm up did help this time, though. Unfortunately the water was pretty much black so I couldn’t really see anything, but the fact that I knew I could make double the distance in a pool helped me stay focused. I started in the back though, still, and counted 4-5 seconds before I even began. I was pretty close to another girl most of the day – she ended up beating me – while doing the backstroke. Harumph.

Actually I expected to have a longer transition time this year because I’m “clipped in” (I have bike shoes that literally clip into the pedals), but apparently I managed to get out faster and didn’t stumble too much while trying to get clipped in. Win.

Joining the YMCA Triathlon club and riding 1-2x a week in a group has been a HUGE help and has really made me not only push myself but realize I’m capable of going faster than I thought. There was a bit of a headwind on part of the ride (though not enough to really blame it on anything) and I think that I was a little more cautious than necessary on a couple turns because I hadn’t ridden the route since the year before, but overall I was happy with my average speed.

I actually had to change shoes this year (bike shoes to running shoes), so I did add some time this time around.

I honestly haven’t been running all that much but I’ve been pretty consistent about speed work so I was really hoping to knock some time off my run. Compared to the previous few weeks, it was actually pretty cool out at race start, but by the time I got running it had warmed up and the run just felt hard. I stopped to walk a bit once and briefly at all the water stops. Ugh. I hate running in the heat 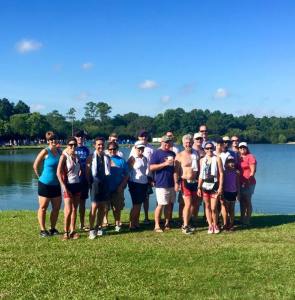