I think I’ve thought or written about how there isn’t enough time in the day to do everything that needs to be done about a thousand times. So, when I was contacted by the Jord watch company about a review and giveaway, I thought “woo hoo – now I can literally watch (pun intended) time go by!”. Kidding. I really was contacted about a review, and although I’m not much of a jewelry or watch wearer unless I’m tracking miles, I do like to try new products so I happily agreed. 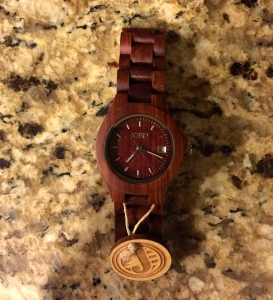 What makes these watches stand out from the rest is that they are wood watches. The band and border are made of cherry, maple, natural green or zebra wood with a face of cherry, black, maple, rose gold, mother of pearl, and turquoise just to name a few. I choose to try the Ely – Cherry pictured above. The watch arrived just a few days after I was notified that the order was placed. Immediately following the order I received an email with details on my order and once it was shipped I received an email confirming its shipment with tracking information. The watch arrived in a well sealed box, and, in my opinion, was packaged very nicely. 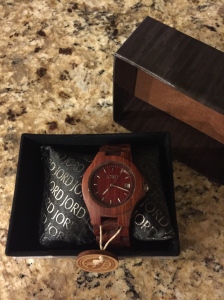 I did need to have the watch sized, but this was something that was easily (and fairly cheaply, it cost me about $10) resolved after a visit to a local jeweler. I admit that I worried a little that the watch would be too big for my wrist, as the watches I’ve owned are about half the size of this particular watch face, but after wearing it for an hour or so it didn’t feel too large at all. In fact, I have received several compliments on it. After wearing it for a couple of days, I noticed that the hour hand had gotten stuck. I was able to move it backwards but not forwards beyond 3:00. It was disappointing but also gave me the opportunity to test out Jord’s customer service. I contacted the person who reached out to me about the review and he immediately shipped me a brand new watch (and  sized it for me) no questions asked. It arrived in about 3 days and contained a return label – all I had to do was repackage the broken watch, put it back in the box, slap the prepaid return label on and put it back in my mailbox. I was very impressed with the level of service. Overall pro/cons Pros:

Now for the fun part – Jord has offered a $129 gift certificate which can be used towards the purchase of any of their watches. (This would cover the full cost of the Ely, or Fieldcrest in any color, or all but $10 of the Sully in any color. As previously mentioned, it could also go towards the purchase of any other watch. My personal favorite is the Cora.) With Valentines Day just around the corner, one of these watches would make a great gift. As luck would have it, there are both mens and women’s watches. Click below and enter via rafflecopter. The contest will end Saturday February 7th at 5pm. (The company recommended placing an order for Valentines Day by February 9th, so I realize this is cutting it a bit close but should still give you a couple days to decide which watch you’d like if you are going to use it as a gift.) Good luck and feel free to spread the word!

2 thoughts on “Keeping Track of Time (An Awesome Giveaway)”