I’ve had four major graduations so far in my life:

None of them ( as far as I can remember ) were as bittersweet as today.

I hit 8 weeks two days ago and was relieved to find that at 8 weeks, babies look more like babies and less like aliens. 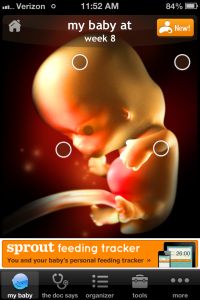 I kinda wish now that I had taken note of what I first thought when stepping into the RE’s office for the first time a year and a half ago. I know that after 18 months of trying on our own I wanted some answers, though admittedly “IVF is your only option” was NOT the answer I was looking for. Clearly, because it took us almost another 18 months to finally delve into IVF. I imagined many times walking out of that building jumping with joy and no desire to look back.

Today was my final ultrasound at the RE’s office. I walked in to a half full waiting room wondering where all of these couples were on their quest for parenthood, how long they have been on this path. I wished them all luck, silently. Then we waited.

After being called back and the customary stripping, I said to Bryan that I hoped today would be my final date with Bob. The same as last time the doc commented on my ovaries (still huge, but shrinking) and counted one……two. Both were still there, both hearts still beating (at 170 and 180bpm), both measuring on track. To see those heartbeats again was amazing – I could have stared at them all day (yes, even if that meant a vaginal ultrasound wand up my lady bits for the whole day) 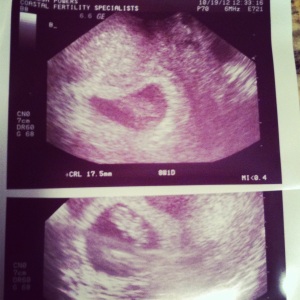 We met with my nurse for a final time, paid our final bill and walked out the door – no longer patients. As we left I felt relieved, grateful, excited, and a little bit sad.

I never expected this office to be as supportive as they were. Those women became more than just the women who talked over my plan, gave me new medication instructions and drew my blood – they became friends. As time went on I found myself looking forward to my appointments – they were rooting us on just as much as anyone else. Even the RE himself, who we didn’t see much of in the beginning, was caring and truly congratulatory. I only had consistent appointments there for a couple of months and I didn’t expect the office to become like a family. I’ve felt an incredible amount of gratitude for all of them.

Today was graduation day, and we left with the greatest diploma possible – two ultrasound pictures of our healthy and growing BOGO’s. 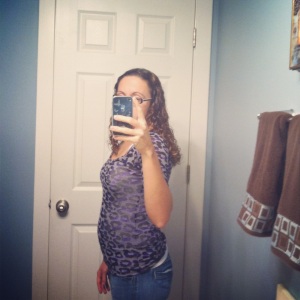