I love my job.

I really do. There are definitely rough days for sure, but overall I feel like I’m making a difference (at least somewhat) and at least a few times a kiddo says something that just makes me LOL 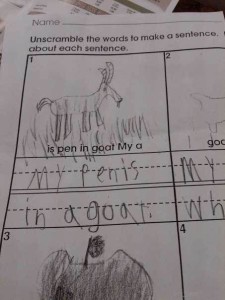 Me: What is this on the paper?

Me: Did you spill it?

This isn’t to say that I never said or did dumb stuff as a kid. My parents like to tell the story about a book they read to me quite often that had something to do with pine trees and cones. Having most of the book memorized, I apparently recited a page by saying “pine trees with cones….chocolate and vanilla”

A bit embarassingly, I admit that I sucked my thumb until I was seven. In an attempt to get me to quit, my parents agreed that if I stopped for 30 days I could get my ears pierced. Apparently they had tried the bitter apple stuff, to which I had just licked it off, made a face, licked it off, made a face etc and continued to suck my thumb as normal. Since I badly wanted my ears pierced, I readily agreed. Three days in, my dad caught me sucking my thumb and told me I needed to start over. A crying fit ensued, where I begged and begged to please not have to start over. My dad thought for a moment and said “ok, we’ll just tack 3 days on the end instead”…….to which I replied “ok!” 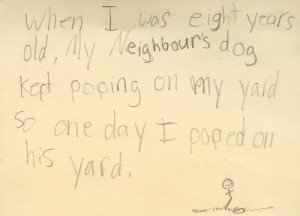 (that was not me)